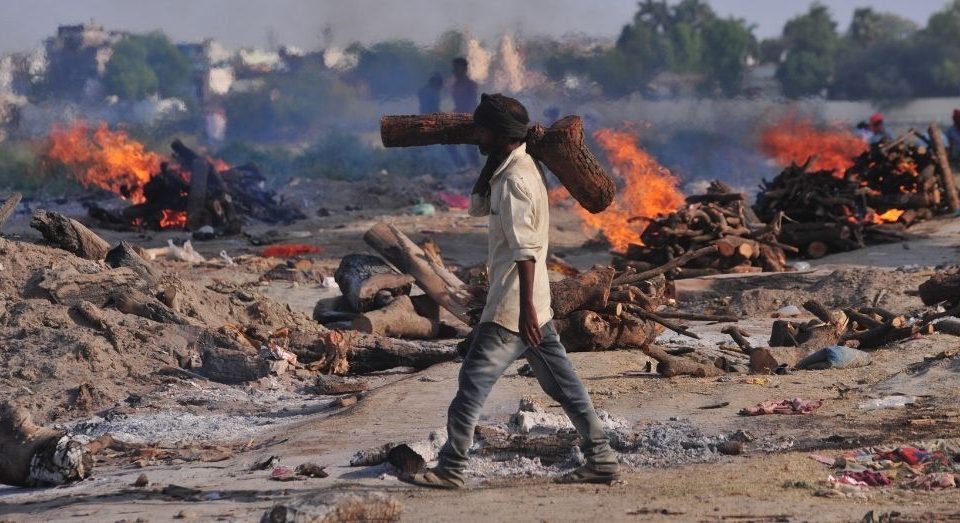 Mani (name changed) identifies himself as a ‘Chandala’ by caste. Before the pandemic, he used to cremate 5-6 dead bodies on average at a Hindu crematorium near Surat, Gujarat. During this pandemic, he shockingly reveals that he is working for 12-14 hours per day for cremating the 18-20 dead bodies.

I asked him, “Where is your PPE kit?”

He said the municipal corporation has not provided it yet. Personally, he cannot afford to buy one from his pocket when he is making a meagre Rs 10,000 per month while putting himself at risk. He is one of the unsung heroes of this hour.

For every new dead body to be cremated, the plight demands a new PPE Kit. Mani has no hope from his city’s governance on nursing the physical health of workers like him, leaving aside the whole question of nurturing his mental health.

A crematorium worker carries wood for the cremation of victims who died from COVID-19 disease, in a mass crematorium ground, on the banks of Ganga River, in Allahabad on April 27, 2021.

The travesty of India’s so-called civilization is that annually, only 1.5% is the health expenditure in the whole layout of GDP figure, making each Indian eligible for 0.33 paisa in the space of mental health assistance. A 2016 National Mental Health Survey revealed that 83% of India’s total population do not have basic access to mental health assistance and treatment.

In this whole saga, the unsung frontline workers like Mani are never blessed to be privileged for accessing mental health kits.

A few weeks back, a report on Kailash crematorium divulged how PMC (Pune Municipal Corporation) failed to deliver the PPE kits to cremating workers.

Would such a municipal body have meted out the same treatment if the workers were elite or from upper-caste?

I am pretty sure they won’t because we treat these casteist people differently while ignoring the dimensions of caste in our social interactions.

Recently, a report by India Today revealed how Brahmin priests make between Rs 15000 – Rs 25000 per body cremation in Uttar Pradesh. Such a priestly class does not put themselves at risk, unlike Mani, but simply charge exorbitant rates for uttering the slokas (verses) because the ‘ritual system’ demands so.

This state of inequity endorses how Caste as a capital comes at the core to socially rescue the privileged ones while underestimating the actual work of Chandalas like Mani who are not privileged.

To add to the woes, the managers at the crematorium also join hands with the Brahmin priests thus generating more helplessness.

“The Bania is the worst parasitic class known to history. In him, the vice of money-making is unredeemed by culture or conscience. He is like an undertaker who prospers when there is an epidemic” – Dr Ambedkar, Volume 9

As per the Vedic system, Avarnas (the fifth varna; untouchables) such as Chandala, Domba, etc are falling out of this ‘hierarchy’ and thus they’re found residing near crematorium areas. In this pandemic (second wave), why is the nation not asking, “Are we really doing enough for the vulnerable ones?”

This pandemic in India was originally transmitted by the ‘passport class’ and it ended up punishing the ‘ration card class’.

In Delhi, the capital city of India, a dog crematorium will be used for human bodies. In the same city, in an interview with VICE, Ashu Rai confessed his story on the predicament of cremating dead bodies. He is immersed in the cremation of 15 bodies on a daily basis at his crematorium, while the government altogether shares suppressed data on the death rate.

Ashu does not wear a PPE kit because he can’t breathe when he works in a furnace. He knows that he is putting himself at risk, but he has no choice. He says, “I do not feel anything now.” The situation has made him numb and nihilist.

Ashu’s father and brother also used to work at the same crematorium. There are many like Mani and Ashu who are still generationally bonded in the casteist scheme based on occupation. It’s the 21st century and the elements of social osmosis in our so-called democratic nation have failed to emancipate the suppressed community.

Drenched in sweat, Ashu put the remaining wood on the body. He took out a piece of cloth and covered his face and head with it. “This cloth does two jobs for me. First, it absorbs the sweat and second, when I hang it on my shoulder, people think that I am a Brahmin priest,” Ashu said, laughing at the irony.

Dipanshu Rathore, a rights activist at the Asia Dalit Rights Forum, explained that it is common to see sons of cremation workers follow in their fathers’ footsteps because few jobs are available to the underprivileged Dalit community. “Who will do all the dirty and dangerous work? It’s the Dalits. People don’t want to get their hands dirty, so they call Dalits to do their dirty job for them,” Rathore told VICE World News.

Even in India’s commercial capital, Mumbai, governed by the richest municipal body BMC with a budget of more than Rs 30000 crores, the workers from Oshiwara crematorium, Chandwadi crematorium or Kalbadevi crematorium are possessing fewer PPE kits.

Some workers from Karnataka had to literally send a letter to CJ (Chief Justice) of Karnataka High Court to give the workers some holiday because they are overworked, and the task of cremation is taking a toll on their mental health. They are demanding better conditions of work and pay too.